Hi, coach Rafi here with ChowdhurysDigital, and today I'm gonna be talking to you about the four-move checkmate, also known as the scholar's mate. So the scholar's mate is an opening, also known as a form of checkmate that is going to focus your attack on black's weak F7 square. Also Read : 10 Things To Know With A Beginners Guide to Playing Chess How to Achieve Checkmate in 4 Moves in Chess My Psychology of Chess with friends So here it goes. White opens with E4. White opens … END_OF_DOCUMENT_TOKEN_TO_BE_REPLACED

The game of chess is basically designed to expand the human mind to its outermost layer but not beyond. Being a chess grand master and a successful entrepreneur, I intend to make my readers absorb the lessons I have learnt from playing chess and to lead any kind of business with fruitful outcomes just like me. As I have implemented the chess strategies in building myself as a successful leader in the genre of business, I acknowledge the below fact: Also Read : Evan Rabin, The … END_OF_DOCUMENT_TOKEN_TO_BE_REPLACED

A chess is a classic board game, like many other puzzle games, has been improved by experts  into a well-organized and elaborated game. Learning the basic rules of the game is simple. However, you cannot say it makes you smarter unless you play often to develop a full understanding of the strategies to deploy. Also Read : How to Achieve Checkmate in 4 Moves in Chess 10 Things To Know With A Beginners Guide to Playing Chess My Psychology of Chess with friends History and … END_OF_DOCUMENT_TOKEN_TO_BE_REPLACED

King’s Indian Defense The King’s Indian Defense (KID) is an aggressive opening for players looking for sharp positions with lots of attacking chances for both sides. King's Indian Defense belongs to the Indian Defense family of openings and is characterized by the early fianchetoeing of the black dark-squared bishop on g7. It is a sharp opening and it has always been a very popular choice for Black ever since its introduction in top-level competitive chess in the mid-20th century. Play it as … END_OF_DOCUMENT_TOKEN_TO_BE_REPLACED

The English Opening This Chess opening involves the first move c4, (called The English Opening because a group of English players in around the 1890's often played it, including Howard Staunton), it is played as one of the main opening choices for white- an alternative to d4(Queen's Pawn Opening) or e4(King's Pawn Opening). Also Read : 10 Things To Know With A Beginners Guide to Playing Chess Evan Rabin, The National Chess Master Loves It When You Email Him Introduction to the … END_OF_DOCUMENT_TOKEN_TO_BE_REPLACED 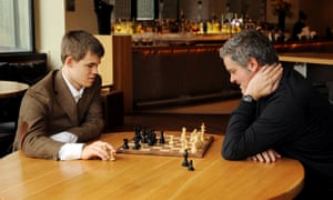 The Grunfeld Defense is one of the most popular chess defenses against the d4 opening from white. Black looks to play a hypermodern defense by allowing white to control the center of the board and counterattack the center with his minor pieces. Also Read : Chess for Beginners Chess 4 Move Checkmate: A Step-by-Step Guide Chess Online: An Exciting Challenge You Can Win White must be careful and defend properly or his center control will vanish. White also has the option to decline … END_OF_DOCUMENT_TOKEN_TO_BE_REPLACED

Are you thinking about starting your own club or organization on your college campus? Are you being required to submit a constitution for your proposed organization? If you answered "Yes" to these questions, you are at the right place! While starting your own club or organization may seem exciting and leader-like, it does entail a tremendous amount of work. Also Read : 10 Things To Know With A Beginners Guide to Playing Chess Chess Jokes: Show Your 32 for These Amazing 32 Chess … END_OF_DOCUMENT_TOKEN_TO_BE_REPLACED

Why is my #photographer playing #chess? Answer: my #lgn local good news story that will air soon on @LocalMemphis. pic.twitter.com/hkouL3yMgC — Katina Rankin (@Local24Katina) August 28, 2014 So, what does a 22-year old Rafi do when he is not busy working on all his other projects? He lends him time to managing the Caritas Village Chess Club! The Caritas Village Chess Club was co-founded by the restaurant owner, Onie Johns and I in order to provide an environment for the Caritas community to … END_OF_DOCUMENT_TOKEN_TO_BE_REPLACED